DruMu was one of the earliest in-jokes on the Anon Meme, providing a lighter side to the wank and drama that was prevalent in its first part. It shipped the (now former) mod of the Hetalia community, Mumumugen, with Drunensis, a Hetalia community member who commented on every single entry in the comm back in the day.

The pairing started after several pages of wank over the community and the controversial way (as some saw it) that Mumumugen ran it. When somebody commented that they hated Mr_louie because "he" was an attention whore, they were quickly corrected and told that Mr_louie was female.

After the anon asked if everybody on the internet was a girl, speculation began over Mumumugen and Drunensis's sexualities, for they were both very obviously male. After one anon joked about shipping them, the lulz (and the birth of this in-joke) quickly came:

As drunesis pushed mumumugen down on the bed he couldn't help but say "You're really cute like that."

"I bet you say that to all the boys," Mumumugen replied.

drunesis smiled. "Oh I do."

But this was nothing compared to the truly epic (and sadly unfinished) story that would follow it in its wake. A copypasta of the story follows below:

Mumumugen sat down on his Venezuelan desk, wrinkling the work on top. It didn't matter though, because it's been a long time since he could breathe without the sound of "DIE KOREA" repeating itself like a mother offering her children seconds of empanadas de queso. No. This was the life. Mummumumumugen and his long term break from that annoying thing previously mentioned. Bliss.

Figuring he should probably update his livejournal so people knew he wasn't dead or something, he walked satisfiedly to his computer. Or laptop. And logged in.

Dear LJ, [endearing_animation.gif] Been awhile, and I wanted to just say hi.

Smiling to himself, Mumu hit "SUBMIT." His day was done for today for now. He pulled out of his chair to return to his Venezuelan desk.

"Already," mumumugen wondered. Looking back at the monitor, there it was. A new comment.

[austriaicon.png]-drunensis I rate this 6/10. But you can work harder on the next one.

What-the-fuck to himself mumu thought, running a hand through his dark brown Venezuelan hair. "Durnesis is really fast! But he's kind of off the topic today, eh?" Mumu had been reading a lot of Canada posts today, so the word "eh" was being used.

So [info]mugen looked for the most confused .gif image he could find to reply to Druny with. But before he could hit submit—

Mumumugen whipped around really really fast and was met with a man with a piece of paper with a picture of Austria taped to his face. The informal mask added to this intruder's allure.

Mumumumu...mumugen gasped, "AH. Who are you and how did you get into my houswe!?"

But WAIT. He recognized that mask. Of course.

"D-druesis..." Mumumugen flushed. That means his face went as red as is visible on a latino.

Leaning over the former mod, drunensis brought his hands to either side of Mumu, cutting off any escape. Laughing again he says, "Now THAT face I rate a 7/10. We should make in an 11."

The owner of the house struggled against Drun's arms that were already embracing him. "T-this is wrong," he crowed. "You can't just come into my house and take me! That's what fascists... NO. COMMUNISTS do. I-I-I...." he was cut off as soon as his shirt was undone. 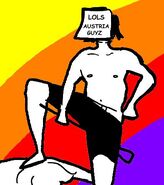 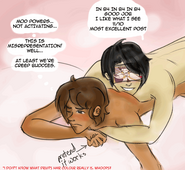 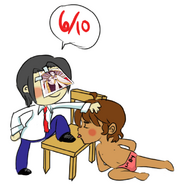 Add a photo to this gallery

Mu discovered the story and much to the shock of the anons, was very amused by it. The DruMu phenomenon grew with a fanart piece produced of the two lucky men, followed by a poem and more fanfiction and art as Part 1 of the meme continued on.

But eventually, Dru vanished from the internet and the DruMu pairing died down, to only live on in the hearts of its most devoted followers. But for others, another pairing soon took its place: ItoMu.

Retrieved from "https://aphanonmeme.fandom.com/wiki/DruMu?oldid=6939"
Community content is available under CC-BY-SA unless otherwise noted.